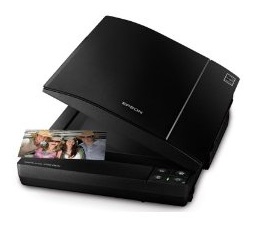 The average home office now has as much electronic equipment as most small businesses, and while many pieces now come in an all-in-one type of a deal, there are still those that like to have all their devices set up individually. The good thing about the obsession that we have with technology is that the prices have now dropped to the point where a quality piece of equipment can be had for a very reasonable cost.

A fine example of that is the Epson Perfection V330 scanner, a flatbed desktop scanner that can be picked up for under $100 at Amazon. Before you write it off as a low-budget piece of equipment that couldn’t possibly meet your needs, it’s important to understand what it comes with, and perhaps more importantly what it doesn’t.

Features of the Epson V330

Many of the scanners that are more expensive than the Epson V330 are actually of the same quality, but have a free copy of Photoshop Elements as part of the entire package, which adds to the overall price. The thinking is that Epson may have intentionally left out Photoshop in order to offer their customers a nice flatbed scanner at a reasonable price, so let’s take a look at what it does come with.

The Epson V330 does a great job of quickly scanning at a very high quality, and can actually handle batch photo scan jobs if the pictures are placed close enough together. Where it does slow down is if the user decides to scan at 2400 dpi, which can be interminably slow whilst delivering a huge file, but that would happen with any scanner.

Even though the package doesn’t contain Photoshop Elements, it does come bundled with Epson’s own software package that allows you to adjust your scanning resolution and perform one-step photo restoration. There is also OCR software included for converting document scans into editable text.

The inclusion of the Scan-n-Stitch Deluxe by Arcsoft is unique to this Epson scanner and the Perfection V33. This software will allow for the scanning of objects larger than the flatbed (8.5 x 11.7 inches) by stitching together multiple images of the item into one final image. If you scan large items like scrapbooks (10 x 10 inches) then you would have to utilize a program like this or consider a tabloid size scanner. The 180 degree lid opening feature also makes scanning larger items like scrapbooks or just regular books possible.

But the majority of people who have reviewed this scanner seem to have primarily purchased it for its film scanning abilities. The Epson V330 has a built-in transparency unit for scanning 35mm film and slides. This is a common feature in many photo scanners, but the V330 is priced a bit less than say the Epson V600.

However, the V330 does have lower resolution and does not allows for scanning of medium format film like the Epson V600, so there are extra some feature differences that justice a higher price tage on the V600. Still, not everyone needs those additional features and can instead use the more affordable V330 as their film and slide scanner with good success.

There are a couple of cons with the Epson V330, with its size being somewhat large for a home desktop set-up. I don’t think that complaint is unique to this scanner though as flatbed scanners can be unexpectedly large. Another annoyance is that the power cord and USB cable plug into the front of the device which makes them very difficult to conceal.

But overall customer reviews of the Epson Perfection V330 are very good. You can read some of the reviews yourself here. If you are looking for an affordable photo or slide scanner that still produces high quality scans, the Epson V330 is certainly worth checking out.